There are so many cases of leopard geckos being neglected by both owners and pet stores, but luckily there are also many lovely people who rescue these geckos and nurse them back to health.

I have reached out to my fantastic Instagram followers so they can share the stories of their leopard geckos, including their tips and tricks, which will hopefully help some people solve fairly common leopard gecko health problems.

Today I am speaking to Sophie, who runs the Instagram account @ravzns_zoo about her rescued leopard gecko, Wafer.

Hi Sophie, thank you so much for taking the time to talk to me. So let’s start with how you found her…

So back in August I was browsing through Pets4Homes and I came across a leopard gecko that was up for re-homing, that looked fine in itself but she seemed to be kept in sub-par conditions – the vivarium was too small and the gecko looked like it was being kept on sand.

I contacted the owner to arrange a pickup date, and then a few days later I got a text from the owner saying that I was going to need to feed the gecko more than usual for the next few weeks as she was on the skinny side.

When I pressed further as to why (I was concerned about parasites at this point) she said it’s because she hadn’t been taking care of her properly and that’s why she is re-homing her, so I asked for a picture, and this is what she looked like.

I was so saddened to see her thin tail, tiny body and dehydrated skin. I asked for her age, and was expecting her to be a juvenile, and found out that she was four years old.

She’s so thin! She looks how mine did when I first bought them at 3 months old… she must have been starved for so long. She’s so lucky you took her home. What did you do to prepare for bringing her home?

So for her quarentine, which I ended up extending to 4 months rather than 3 months, I put her in a 45x45x30 Exo Terra vivarium with paper towel substrate and now she’s moved into a 90x45x30 .

I got all my feeders ready and gutloaded them. I made sure I had variety; roaches, crickets, superworms and mealworms.

I brought her home and offered her food that afternoon to see if she had the strength to do it. Luckily she did, and she ate her first big feast in a long time. She is such a sweet gecko and seemed SO happy for food. That continued for a few days and then she finally did a poop that I got faecal tested, and that was clear too, thank goodness.

How did you go about getting faecal testing?

I just went to an exotic vet with the sample.

And did she have any other problems when you got her?

Yes, I had to (and still have to) give her tootsie baths as she struggles with shedding on her toes.

You can see from the photos that she still struggles with stuck shed, but I’ve spoken to other leo rescue owners and they said they do too. I think it’s from where they were previously so dehydrated.

That’s interesting, I didn’t know that! How did you tackle her stuck shed?

I had to do my moist sauna which is where I put her in a carrier with a warm, damp paper towel in the bottom and on the top for 20 minutes whenever she got stuck shed (she used to get it so badly under her eye too).

She doesn’t have trouble with her eye any more, but I continue to give her foot soaks with the help from cotton wool buds to ease off the stuck skin.

Thank you so much Sophie, this has been such good information, it’s great to be able to share other owners’ experiences with geckos and I’m sure this will help lots of people.

Hopefully it will illustrate that it’s not the most difficult thing in the world and open people up to taking in rescues. Oh and also highlight a healthy chunky geck hehe!

Key points to take away:

Wafer: Before and after 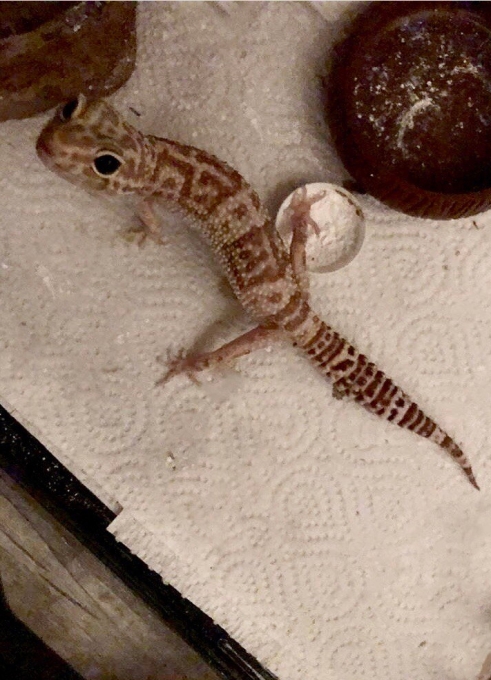 Caught undressing 👀🙈
Caught in the shed looking a bit creeeepy 👻
She’s shedding! No idea why she’s not doing this in her moist hide today 🤷🏼‍♀️ but I’m not complaining as I just got to witness this rare event!
Happy Friday 😍
Non-gecko owners don’t understand when I say things such “oh he has such a wise look on his face here” they’re always like “erm it’s just a lizard, it has the same face all the time!” FOOLS!!
Someone looks dusty like she’s about to shed!

I pay £86 per year for my domain name and web hosting. If you enjoy my content and would like to donate, it will help me keep my site running for another year.

some posts may contain affiliate links