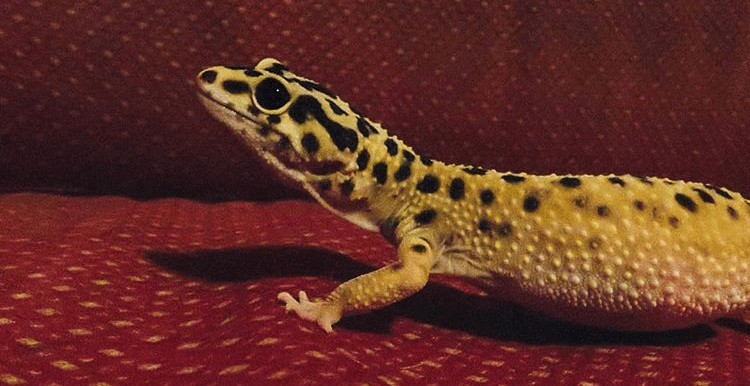 Unfortunately there are many cases of leopard geckos being neglected by both owners and pet stores, resulting the leopard geckos are being starved, kept in the wrong conditions and even left for dead.

Over my next few posts, I will be interviewing some kind owners who have rescued leopard geckos, and at the end of this post I will summarise the methods they used for nursing them back to health.

Today I am speaking to Veronika who runs the Instagram account @Arnie.n.thegang about her rescue leopard gecko, Ellie.

@Arnie.n.the.gang: So this is the state I found her in. She was kept by a breeder who claimed she was healthy and eating. She did not give her any vitamins, she sometimes got calcium so she did not have MBD, but she was very thin.

She had trouble catching her food, and was also kept on this gritty sand that you can see in the pic. Her stuck shed was BAD. She lost a little bit of one of her toes and others were starting to turn black.

When I got her she was 22 grams. She had a heat lamp as a heat source and no belly heat.

Leopard Gecko Care: The poor girl, I guess the first thing you did was get her in the proper setup with no sand substrate, and gave her some underfloor heating. Then what did you do?

@Arnie.n.the.gang: First thing I did was give her some soaks in water to get the stuck shed off her. This was stressful for both of us. It took me three days of struggling to get it off. After I had done that I started to give her Betadine soaks (Betadine disinfects wounds) to treat her toes that had started to turn black, I wanted to see if I could save them, which I did.

Then there was the issue of her weight, but luckily for me she was super hungry and jumping after everything I gave her. I started with mealworms because she was so tiny. I had to hand fed her because her aim was BAD. I dusted them with calcium powder and Reptivit from Zoomed and I fed her almost every day. Once she pooped I took it to the vet for them to check it for parasites.

Leopard Gecko Care: And was everything ok at the vets?

@Arnie.n.the.gang: Yes, and the vet told me her bad aim could be due to vitamin deficiency, so I dusted her food with vitamins more often, which seemed to help. It took around 2 months before I saw results, but now she can aim very well and enjoys chasing her food.

Once she gained more weight, I started to give her superworms as well, she doesn’t like dubias though. I also gave her occasional treats in the form of a waxworm, she went absolutely bananas!

For three months I kept her in a tub setup in a separate room, away from my other reptiles, for safety.

Leopard Gecko Care: That’s fantastic! And a great idea to quarantine her in case she had any diseases. How’s she doing now? 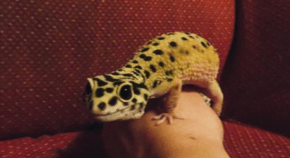 @Arnie.n.the.gang: She is now 65 grams, healthy and super active! Her walking is a lot better, she loves to climb and she’s really good at it too.

She still has a crooked tail at the very end. The vet said it could be from any number of things: birth defect, maybe she was cohabited with other leopard geckos and its the result of a fight, or it could be from MBD and her tail is likely to remain like this forever.

Leopard Gecko Care: Thank you so much for taking the time to do this, you’ve done such a great job and she is absolutely gorgeous!

Key points to take away:

I do not run this website for profit, and I pay £86 per year for my domain name and web hosting. If you enjoy my content and would like to donate, it will help me keep my site running for another year.